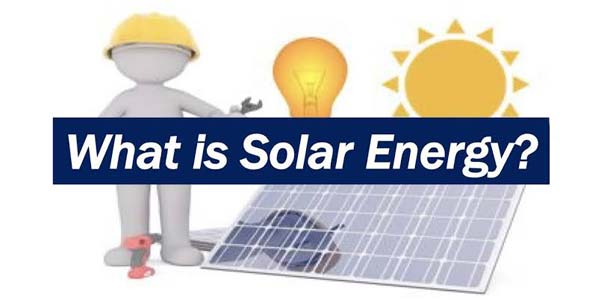 Solar power uses the clean and abundant energy of sunlight to generate electricity. This can be done directly, through the use of photovoltaic (PV) cells, or indirectly through concentrating solar power (CSP).

The solar array at Nellis Air Force Base was the largest PV plant in North America it was complete in 2007. This plant alone contains approximately 70,000 solar modules and produces 14 megawatts of power.

Why Solar is important?

Electrical power is produced when the concentrated sunlight is directed on to photovoltaic surfaces or used to heat transfer fluid for a conventional power plant.

In a conventional power plant scenario, thermal energy is turned into electricity through the use of a steam turbine or heat engine that drives a generator.

One of the challenges of solar is it cannot produce energy when the sun is not shining. Some CSP systems use Thermal Energy Storage to compensate for this, storing heat for energy production when there is no sunlight.

Solar currently accounts for about .01% of the United State’s energy production, the smallest amount of any type of renewable energy.

Nevada currently has 10 utility-scale solar plants in some level of operation, producing approximately 1,800 megawatts, or enough electricity to power about 360,000 Nevada homes (homes use about 5,000 watts of power or 6,500 watts in Las Vegas).

What is Energy Efficiency?

EE uses less energy consumption to achieve the same, or higher, level of energy service. A compact fluorescent light bulb (CFL) is more energy-efficient than an incandescent bulb because it produces the same amount of light but uses 75% less energy.

Energy Efficiency is much less expensive and time-intensive than increasing supply by building a new generation.

The savings potential of Energy Efficiency far outweighs the initial investment required. Unlike fossil fuel resources, EE does not pollute and unlike solar and wind, it is not weather dependent.

Energy Efficiency can be achieved through the development of new technologies, like more efficient cars and Energy Star products, or through the use of existing technologies more productively, like insulating ducts and weatherizing windows.

The largest potential for energy savings exists in the retrofitting of homes and commercial buildings.

Nevada has the potential to save 13.5 million megawatts of energy consumption, using a known building and industry EE technologies, by 2025.

Why Energy Efficiency is important?

Reliable – Energy Efficiency is not dependent on weather, or source generation

Economic – Energy efficiency positively impacts jobs. It tends to shift spending away from the capital-intensive energy industry to the labor-intensive industry.

Safety – Energy Efficiency relies on technology development and implementation in the United States and has no foreign dependence contributing to our national security.

Geothermal energy is produced with the heat from the interior of the Earth. Geothermal is a renewable energy source because the Earth continuously produces heat from the slow decay of radioactive minerals found in the rocks and fluid of the Earth’s crust, mantle, and core.

Geothermal resources are classified according to their temperatures, determined by the depth in the Earth’s crust, as:

Most high-temperature resources are only used for generating electricity. The United States currently generates as much geothermal electric power as could be produced by 4 large nuclear power plants, about 2,200 megawatts.

Moderate and low-temperature geothermal production is used in 2 ways. Direct uses the high temperature of water close to the Earth’s surface to directly heat buildings.

The United States currently generates enough direct use of geothermal energy to heat 40,000 homes. Ground Source Heat Pumps take heat from the ground into the building during the winter and away from the building into the soil or water in the summer.

The US ranks first in the world in geothermal production. This energy source makes up .4% of all US electricity generation.

Nevada has 16 geothermal plants producing a total of approximately 400 megawatts. According to the Geothermal Energy Association.

Why Geothermal is Important?

Environment – Direct use geothermal production has zero environmental impact and overall, geothermal plants produce less than 1% of the CO2 emissions of a fossil fuel plant.

Reliability – The Earth is continually producing heat for geothermal capture; geothermal energy is available 24 hours a day, 365 days a year.