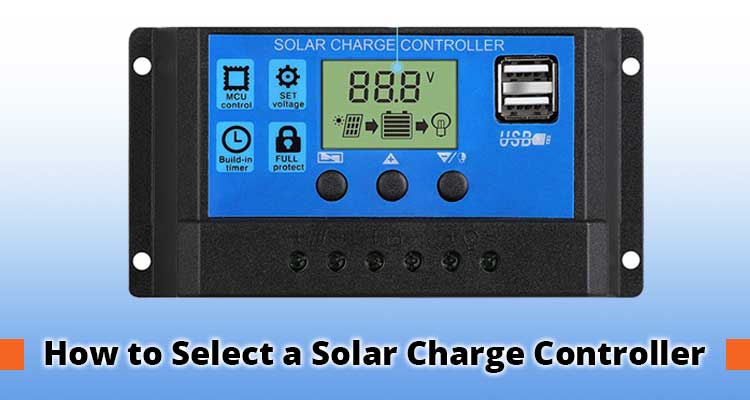 Solar panels can send a much higher voltage to the battery than it can handle. When that happens, there’s a good chance the battery will get damaged. Or even worse, there can be an explosion. No one wants that!

Even if the battery doesn’t explode, I take it you don’t want to keep replacing it due to premature damage.

The controller offers protective benefits, ensuring the right voltage is sent to the batteries and preventing over-charging.

If you’re looking to bring out the optimal performance from your solar system while keeping things safe, you might want to get a good charge regulator.

But there are too many models out there to choose from, and the technical details are no fun if you’re often busy.

With this guide, I am guided to help you choose the right solar charge controller without losing you in the technical lingo.

First – What Is a Solar Charge Controller?

A solar charge controller is a device that goes in between your solar panel and the battery to regulate the rate of power flow.

It checks the voltage of the battery and reduces the charging rate as the battery nears its full capacity. Some controllers also prevent the backflow of current from the battery.

What are the functions of a solar charge controller?

Here are the primary tasks a charge controller is charged with:

Some controller models also perform other functions, like turning the lights on/off and redirecting the excess power to the heaters.

Before you even get a solar charge controller, it is good to ask this question – do I really need it?

You need a solar charge regulator when:

If your answers are yes one or more of the statements above, you likely need a charge controller. But if you answered no to all, then it’s unlikely that you need the device.

Again, if your solar energy setup is set to interact with your mains power supply, you don’t need a charge controller. That’s because the excess energy gets redirected to the mains, meaning there can’t be overcharging.

Now, to help you choose, I’ll talk about the factors to consider when looking for the right solar charge regulator.

6 Factors to Consider When Looking for A Solar Charge Controller

The main factor is the type of controller. There are three main types:

Shunt charge controllers are the oldest type. As the title suggests, they utilize a simple concept to prevent battery overcharging.

When the voltage falls below the lower threshold, the switch gets deactivated, allowing the current to flow in again, until the time the upper threshold will be reached again.

But still, some people use them for their affordability and simplicity.

PWM is pulse-width modulation in full.

The trickle mode is a state where the current is not cut but reduced greatly to very low rates.

But the issue with this type of controllers is that to use it, the solar panel and the battery must have similar voltages. For example, if you’re using a 12-volt battery, which is what most people use, then you need a solar panel that puts out something close to 12 volts.

Another problem with these is that they’re not built to handle high voltages.

Thus, if you’re looking for something that works with a solar panel meant to power the entire household needs, you’ll not find PWM controllers useful. These are best suited for small solar panels.

These are the newest kind of solar panel controllers. Like the PWM controllers, these monitor the rate of charging the battery’s voltage. When the battery approaches its full capacity, the MPPT controller’s switch automatically activates, reducing the current flow rate.

The current flow goes down until it gets to the trickle rate when the battery is full to keep it that way without overcharging it.

If you have a solar panel and battery setups operating at different voltages, you need an MPPT controller.

While other controllers are able to work only in a situation where the battery and the solar panel have similar voltages, the MPPT controller works even where the voltages are different.

Another area where MPPT controllers are better is in the tolerance to high power. The controllers allow high voltages, even higher than 35V to flow through the wires.

The higher voltage reduces power loss and makes it possible to charge the battery faster.

When there is excess voltage, the MPPT controller converts it into amps, which increases the efficiency further.

More difficult to install due to the advanced and technical features

So, which of the three is the best? That depends on your needs.

If you’re on a budget and need only something simple, a shun charge controller might suffice. But if you have some cash to spare and efficiency is what you’re looking for, you’re better off with an MPPT unit.

PWM is the in-between. If you want something more efficient than the shun charge controllers, but your PV system is only small, the best solar controller would be a PWM unit.

I know I have talked a lot about the type, but that is because it is the main consideration. Other factors to think about when shopping for a controller for your PV unit include:

Controllers come at varying prices. Some are inexpensive while others feature premium prices.

The price ranges from less than 30 dollars to thousands of dollars depending on the features. Some of the features to think about include the amperage, the display, the ability to work with high voltages, and more.

For instance, a 30amp PWM unit can cost you as little as 30 bucks. One with an amperage of 60 would go for over a hundred bucks.

That being said, the main consideration with regard to the budget is the type. Simple shun controllers are the cheapest, followed by PWM, and then the MPPT, which are the most expensive on average.

Maybe you’ve gone completely green. That means using solar energy only to power up your home, which is possible by the way.

In that case, you’re likely using a large solar power unit. A PWM controller won’t suffice. It cannot deal with all the power the solar panel is putting out.

What you need is an MPPT unit. Such a unit would be able to handle the high current and use it effectively. Again, if you want to connect more solar panels in the future, an MPPT controller will allow that, which the PWM doesn’t.

On the other hand, if you have just a small solar panel that doesn’t take care of all your home’s power needs, there’s no need to get an expensive MPPT controller. You’ll probably do just fine with a PWM controller.

Related: Our Reviews of Top Quality Off Grid Inverters

Atmospheric temperature is one of the factors that affect a controller’s efficiency. A PWM controller works best in a warm environment. It doesn’t do well in cold environments.

MPPT controllers, on the other hand, can operate in both cold and warm environments.

Depending on the price of the product, the warranty might be a critical factor that makes all the difference.

You don’t want to invest hundreds or even thousands of dollars in a unit, only to find that it comes with the ordinary amazon product warranty.

Check the manufacturer’s warranty and make sure it covers you for a good duration that’s acceptable for the price.

How handy are you? If you’re a DIYer, chances are that you’re willing to embark on the task of installing your own solar charge controller.

If it is a PWM controller, the task will not be very hard as long as you have a good user manual and some patience. But if it is an MPPT controller, you’re better of calling an expert as the task would be arduous and too technical.

It’s true that technology can be overwhelming. Well, you’re not alone. There’s always a first time for us all.

Don’t let the marketers and sellers confuse you or lure you into buying their products with flashy descriptions and promises. Make sure what you’re getting suits you perfectly.

Like I said before, as long as you’re using an off-grid PV solar unit that is connected to batteries for power storage, a solar charge controller is essential.

It will prevent the premature damage of batteries by ensuring they’re not overcharged. At the same time, it will be keeping accidents (from exploding batteries) at bay.

Well, I take it you’re now well equipped to search for a solar charge controller that suits your needs.